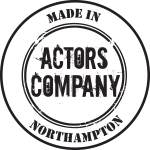 Northampton is a fractured and politically unstable town, led by the ‘great’ leader Ugu. His Council are currently attempting to take charge however seem to be making a mess of things, money and resources are disappearing, services are stopping, all joy and creativity is officially banned.

No one is who they appear to be and everyone is suspicious and out for themselves.

Abington East is at war with Upton West, Hunsbury South seriously dislike Kingsthorpe North, and Wheelers are taking over the town centre. Northampton is officially divided.

Today is the Great Ugu’s Annual Water Drinking Ceremony and it is compulsory for the four Quadrants of Northampton to drink from the forbidden fountain, however, today something isn’t quite right with the water and the inhabitants are forced to confront the fact that they have been living under his enchantment for 58 years and Northampton might not be what it seems at all.

Audiences promenade across Northampton with their fellow companions Scraps, Frogman, Nimme Amee and Jack (a man who is seriously concerned that he has a pumpkin for a head) to discover who they really are, where they really are and how on earth they get their memories back.

Please note that each performance has multiple starting points which are selected when you book.

Inspired by the tales of Oz, Royal & Derngate’s The Actors Company have devised and collaborated with writer/director Erica Martin and song writer Amy Jones, to create an immersive, promenade musical where we encourage you to discover whether there really is no place like home.