A Tale Of Two Cities Blog

There’s a wise old theatrical saying that the purpose of Day 1 is to get to Day 2. It’s certainly true that the first day of any job is a weird experience, featuring that same combination of excitement and fear that is common to any new beginning. Walking into a room full of strangers you’re going to be working closely (and, on tour, sometimes living) with can be a fairly nerve-wracking experience.  You might already know some of the cast, but too much chat to the people you already know is cheating. You have to Seek Out Someone New.

Thank goodness for travel and accommodation. They are two ready-built conversation topics for a first day and my word do we reach for them. ‘Good journey?’ ‘Are you staying up or commuting?’ ‘Booked your digs for (insert tour venue three months from now) yet?’. London-based actors ask each other which part of London they are from and then instantly forget the answer.

Small though this talk might be, it’s useful. It’s an alternative to all the little coping strategies- helping oneself to yet another coffee, or a tactical fake trip to the toilet- that are preferable to standing alone wondering who to talk to. 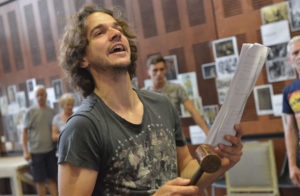 Having mutual friends with one of your new colleagues is also a godsend on day one, and in the social media age it’s easier to find who those people might be. To be able to say ‘You know actor X, don’t you?’ provides not only a topic of conversation but a kind of endorsement; the equivalent of saying ‘ok, we both think actor X is great, and actor X thinks we’re both great, so there’s a chance we’ll get on’.

Eventually the small-talk ends and it’s time to stand in a circle and introduce ourselves to the wider team. This is not as easy as it sounds. More than one actor I’ve spoken to about the experience of a meet-and-greet has confessed to absurd worries that, on saying ‘my name is Y and I’m playing Z’ someone else will say ‘Oh dear. Did your agent say you were playing Z? You’re actually understudying Twelfth Villager’. As far as I know that’s never happened, but nonetheless a lot of people avoid the issue by side-stepping the character name completely and adding a mumbled ‘actor’ after they’ve said their own name.

Once you’ve met-and-greeted (Meeted and Greeted? Met and Gret?) everyone working on the show, the rest of the day will involve a look at the set, probably a talk from the director, and a readthrough of the play. It’s during the readthrough that you decide that you’re the worst actor ever to draw breath, and that everyone in the room knows it. Not only that, but everyone else in the cast is really brilliant and you’re the only problem. The only consolation for this bit of first day paranoia is the knowledge that everyone else is thinking the same thing. 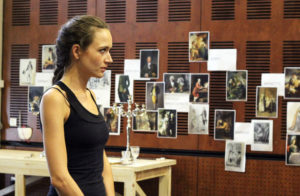 Those are the possible downsides of first days. But of course sometimes they can be really exciting, too. Our first day on A Tale Of Two Cities was one of the exciting ones. Working on a brilliant adaptation of one of the greatest novels in the language helps, of course, but there was a feeling of real potential in the room when we’d finished reading Charles Dickens and Mike Poulton’s words.

And when you’ve read it, there’s nothing else to do but start making it live. We hit the ground running on this one- within forty-eight hours we’d learned songs in French, had a crash-course in 18th century dancing, explored the physical differences between the streets of London and the French court, and been allocated research topics to present to each other. And that’s why the positives of a first day always outweigh the nerves: because you know there’s a lot of work and a lot of fun ahead. By the end of day two we were doing some physical group work and I had my head in someone’s armpit. It was probably for the best that we’d taken a moment to introduce ourselves over coffee the previous morning.

Rehearsals are the best of times, they are the worst of times*. The thrilling sensation of feeling you’ve nailed the emotional and physical geography of a scene is only matched by the grim misery of finding that one scene or line or moment you can’t quite land no matter how you try.

The French word for rehearsal is ‘repetition’ and they know what they’re talking about. The solution to those tricky moments is to keep working at them until they yield. Building a performance is much like massaging tense shoulder muscles in that regard (stay with me…); when you find a knot you have to work away at it, painful though that might be, until it untangles. You can’t just ignore it and hope it goes away.

It’s amazing how often these problems are solved by simple, practical changes. You may feel that the line which felt unbearably fake when you were sitting down suddenly takes on a universal truth if you say it standing up. The moment which feels very uncomfortable on stage left suddenly makes perfect sense if it happens stage right. Something as mundanely pragmatic as doing it faster/slower can be transformative.

In a way, one of the director’s main jobs in the rehearsal period is to stop us acting. If we’ve done our 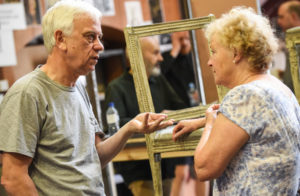 preparatory work- either in discussion in the rehearsal room, or at home with the script- we’ll know what actions we’re trying to take and what emotions we’re trying to convey. Problem is, part of understanding that process is to demonstrate it, so an actor in rehearsal will often fall back on showing the audience what we want them to see rather than inhabiting it. Some directors will even address this issue head on, with a direct exhortation to ‘Stop acting!’. It’s a blunt instrument as a note, but it nearly always does the trick.

On A Tale Of Two Cities James Dacre used a process designed to solve this problem before it arises- spending the first week with the cast round the table, finding the events that bookend each unit of each scene, then working out how they affect each character on stage. The advantage of this approach is that once we were on our feet, we knew straightaway what we were aiming to convey and it was easier to bypass that intermediary ‘showing’ stage. If you know exactly what your character is feeling from the moment you step on stage to the moment you leave it, it’s easier to feel it yourself.

That clarity is particularly important in a big old beast of a play like this one. A core company of thirteen, a community ensemble of twelve, two young boys, twenty scenes, three courtrooms, a revolution and a half, some dances, some fights, some executions, some lynchings, six songs, a wedding and a steak and kidney pie. Our job over the last four weeks has been to take that huge canvas and focus in on every individual element of it, so every moment has detail and truth even when the stage is full and the action rattling along. 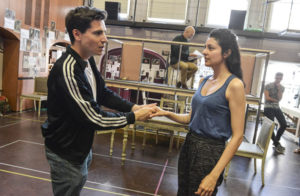 And then, once the show has been meticulously assembled, it’s time to add a whole other set of layers.  As I write, we have done our final run before starting the tech rehearsal tomorrow. There’s a wonderful fragility to the last runthrough in the rehearsal room, because everyone knows it’s the last chance to approach the show in shorts and trainers and natural light. Once we move into the theatre it’s all about enhancing the work we’ve already done with the talents of the lighting, sound, set and costume designers, and although that process is hugely exciting, it’s time-consuming. A line which takes seconds to deliver may also be the cue for countless sound and lighting effects: an entrance which was beautifully timed in the rehearsal room may need to be totally reworked when entering from the wings.

The beginning of a technical rehearsal is always a load of fun. Seeing the set, and our colleagues in costume, reminds us that we’re lucky enough to play dress-up for a living. By the seventh or eighth session, as we crawl through the play at a page an hour (often playing a game unique to actors in tech called ‘I wonder what time it might be’) the thrill can wear off a little. It’s worth it, though. The tech is the part of the process where you realize you’ve not just been rehearsing for fun, that you actually have to make a show- and that you are surrounded by people whose job it is to make it a far, far better show than you have ever done before. **