The all-female cast has been confirmed for the world premiere production of The Worst Witch which opens here at Royal & Derngate this Christmas as part of the theatre’s Made in Northampton season. An original story for the stage by Emma Reeves (Royal Television Society Award for Best Children’s TV Programme and 2017 British Screenwriters Award for Best Children’s Programme) based upon Jill Murphy’s beloved series of classic novels The Worst Witch, the production will be directed by Theresa Heskins (2017 UK Theatre Award for Best Show for Children and Young People) and designed by Simon Daw, with music by Luke Potter.

The Worst Witch is co-produced by Royal & Derngate with Kenny Wax Family Entertainment, Novel Theatre and Nica Burns and will embark on a major national tour in 2019, after its run in Northampton.

The Worst Witch is the story of an ordinary girl who finds herself in an extraordinary place: a school for witches. Now in her final year, accident-prone Mildred Hubble and her fellow pupils leave a trail of mayhem behind them as they find themselves at the centre of a battle that’s being fought for their future. The show features magic, puppetry, original music and plenty of Mildred’s unique brand of utter pandemonium. 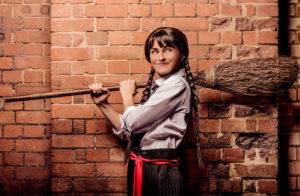 Jill Murphy’s The Worst Witch stories have sold more than five million copies and been made into films and TV series by HBO, ITV and CBBC. Jill commented: “My first trip to the theatre aged four, opened up a magical world – so real to me, that I had to be restrained from climbing onstage to help the children in peril! My mum was quite cross with me, but I never wanted the show to end and sang the songs loudly all the way home on the bus. Imagine how proud I feel, all these years later, seeing my own Mildred Hubble on stage with all the characters from Miss Cackle’s Academy. I still feel thrilled to bits when I go to the theatre and I just know The Worst Witch is going to be a magical production.”

Emma Reeves added: “We’re creating a brand new story as well as revisiting moments from the books. Jealous Ethel Hallow is out to spoil Mildred’s fun, and Miss Hardbroom is opposed to all fun in general. But, without giving too much away, Mildred faces a greater danger than she ever imagined as an old enemy returns, with a plan for revenge that could threaten not just the Academy, but the whole world… “

Winner of the Royal Television Society Award for Best Children’s Television Programme, and of the 2017 British Screenwriters Award for Best Children’s Programme for the television adaptations of The Worst Witch, Emma Reeves’ screen writing credits include Eve, The Dumping Ground, Young Dracula and The Story of Tracy Beaker. Her stage work includes the Olivier Award-nominated and critically acclaimed adaptation of Hetty Feather (UK tour and West End).

The production will be directed by Theresa Heskins, Artistic Director of the New Vic Theatre, Staffordshire. Theresa commented: “This year, when we’ve seen the start of a rebalancing of power within our society, it feels like an important time to be creating a play about young women who are learning, collectively and individually, to use their power; and the danger if they decide to use it not for good but for ill.”

Theresa’s past productions include The Snow Queen which won the 2017 UK Theatre Award for Best Show for Children and Young People. Her wonderfully inventive and hugely popular production of Around the World in 80 Days was nominated for the same award, in both 2015 and 2017, and will tour to America in 2019.