As brand new musical Gin Craze! gears up for its first previews this weekend, Assistant Director Tian Brown-Sampson is sharing an exclusive glimpse behind the rehearsal room doors with her Rehearsal Room Diary…

Due to COVID restrictions and concerns, all the cast and the close production team, including the director, choreographer, musical director, assistant director (that’s me!) and stage management are staying at nearby apartments so we can all become a bubble and limit our travel and interaction with people more easily.

We have to be extremely careful because if anyone tests positive and it spreads throughout the team, it potentially could mean the whole production shuts down just like other shows across the UK. This means that we all need to be extremely careful, and if we want to be social that it has to mainly stay within our bubble.

The first day that we all arrived in Northampton it was BOILING HOT. After settling in and getting little bits and pieces together, most of us met up together in the local park. I was the last person to meet everyone as they had all met each other in the previous week in a two-day musical workshop to get a head start on learning the songs and musical arrangement.

It was early night for us all because the weather was extremely hot! It had made us all quite fatigued and so we wanted to retire for the evening as we knew we were in for a long and challenging rehearsal process. There was so much to achieve within just four weeks, and being in a stuffy, hot rehearsal room was only going to make it that bit more tiring and so we needed to make sure to take good care of our bodies.

(Of course little did we know that in the next day or two the temperature was going to dramatically drop out of NOWEHERE and we would go from sweltering in the rehearsal room to being shivering cold!)

On the Monday, we spent the first half of the day having a bit of a play about together, and doing a variety of slow motion games and exercises to build in the theatricality of movements in the characters. Then, on Tuesday, Paul (Choreographer Paul Isles) led a 20 minute circuit training session for the cast. Paul also encouraged Michael (Director Michael Oakley), Tamara (Music Supervisor/Arranger Tamara Saringer) and myself to get involved but unfortunately Tamara had to be up in the other rehearsal space sorting the musical arrangement, and myself and Michael… well, we just thought the cast needed all the encouragement in the world to help them get through it, so we begrudgingly stayed on the sidelines and acted as cheerleaders!

As the cast have a lot of work on their hands, dancing, singing and playing instruments often all at the same time, this job requires a lot of stamina so we will be implementing vigorous movement workouts as well as fun dance routines every morning to help prepare them.

On Wednesday, Paul took the cast through some Georgian etiquette and movement training to aid them in their physicalisation of their characters whilst rehearsing and building the musical.

We started rehearsals with three days of exclusively music rehearsals. Our actors are all actor-musicians – there is no band. THEY are the band. So they act, sing, dance and play their own accompaniment (you all are in for an absolutely killer of a show).

As our director, Michael always says “for 30 quid for a top price ticket, the audience are really getting their money’s worth!”

I had only before this point read the lyrics for all the songs and heard some samples, so I was absolutely blown away not just by how beautiful the songs sound, but just how immensely talented our group of actors are. Can’t really argue with our director – you all are really going to get your money’s worth!

By the end of Wednesday, we had covered all but one of all the Act One songs. 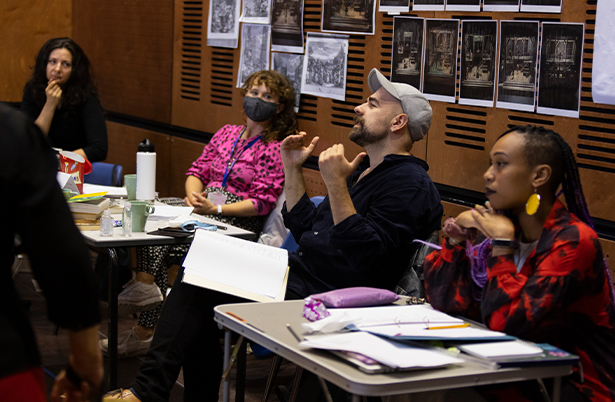 From Thursday onwards, it was all text-focused work. Thursday was our first read-through with the latest draft of the script with the entire company, and then we started going through the script again doing more text and character analysis, and highlighting any words or terminology we weren’t necessarily familiar on.

Michael, our director, is very big on history and was talking us through a lot of the historical contexts of this particular era of the mid 18th century, and gave us in-depth analysis of the Hogarth paintings and the influences on the creation of the show.

A particular focus were the paintings Gin Lane and Beer Street, which had influenced the creation of our opening number (very subtly named Gin Lane v Beer Street.)

England had a new Dutch King, William III (William of Orange) – the government pushed gin because it originates from the Netherlands. 40 years later, then came the gin craze epidemic – it got out of control because it was so cheap. The government later dropped the price of tea as an attempt to divert the working class away from gin. The thinking was that if the lower class wanted to act and have the things that the middle/upper class had, let’s give them tea.

And then from that point, tea then became the national drink – because the government had made it so the poor could no longer afford gin! 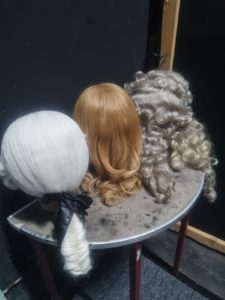 We have very extravagant costuming! You’re all in for a treat! They’re quite elaborate, colourful and we have looooads of them!

Our Aruhan Galieva and Paksie Vernon who play the two leads, Mary and Lydia, had a PR photoshoot on Thursday evening for the show.

It began a bit awkwardly, because everyone but those two were in modern dress and fully masked, and eagle-eyed staring at them – then Paul put on some tunes, and then all of a sudden it was a party!

We worked with an absolutely fabulous photographer, Ellie Kurttz, who took stunning shots – they were absolute magic. And she’ll be back for our rehearsal room and production photos!

Our two male actors, Peter (Peter Pearson who plays John Fielding and Bartholomew) and Alex (Alex Mugnaioni who plays Henry Fielding and Jekyll), are living together and officially have the “gaming apartment”. They both brought their Nintendo Switches and Alex had brought a mountain load of board games – so there is very little chance of us getting bored over this seven week period! On Thursday they invited the team over to play some board games to get started the social events for the week.

The Fieldings are known historical figures. Henry Fielding who was a novelist, playwright and then a magistrate. His brother, John Fielding, was a magistrate and social reformer. And their sister, Sarah Fielding (played by Rachel Winters) who was also an author and wrote the first novel in English specifically for children. However, unlike her brothers, Sarah is unfortunately typically forgotten in history.

Fielding and William Hogarth were actually on the side of the poor, but did find the necessity to reform them. At this point in history, we’re very much at the point where there is great focus and importance on “improving” oneself.

Paul invited us all round to his and Michael’s apartment for the England v Scotland match on the Friday (they bloody lucked out with the penthouse apartment and I am SEETHING! IT SHOULD BE MINE!) Apart from Paul, most of us didn’t have a clue about football, so Paul got us all into the game by getting us place bets when we thought the first goal would be for each half, and this really revealed the competitive side of all of us – particularly Paksie. But joke was on us, as the match ended 0 – 0.

While we have to limit contact with other people and have to avoid being inside closed spaces as much as possible, we are allowed to go out if we’re in outside areas. So on the Saturday we went to a local bar which has a large outdoor area, so most of us gathered there for a bit of food and lots of drinks to celebrate the end of the first week of rehearsals.

We played a few games amongst ourselves, and discovered that we are TERRIBLE at counting. Thank god we work in theatre, darling.

At least… for NOW!