Supporting and nurturing talent is a vital part of Royal & Derngate’s creative work and we have a number of ways that artists can engage with us.

In collaboration with the JMK Trust, Royal & Derngate are delighted to be offering a series of workshops which will allow directors and theatre makers based in the East Midlands the opportunity to gain an insight into the processes other directors use when rehearsing a play and the workings of a busy regional theatre.

Royal & Derngate does not have a Literary Department and so sadly we do not have the capacity to read all unsolicited scripts that are sent to us. However, we read as much as we can and aspire to respond to writers where possible. Due to workload, please be aware that it can take a number of months for us to read your work and send a response. If you are interested in submitting a script, please e-mail it to Heather Mendonca.

Royal & Derngate is committed to supporting the work and development of local theatre makers through training schemes that develop emerging artists who have a passion for creative learning and participatory work. We have different levels of training, from Assistant and Trainee Practitioners through to Creative Projects Associates.

Occasionally, we also offer voluntary internships and support for emerging companies to work with the Creative Learning Team to develop a specific participatory project.

In 2015 Royal & Derngate joined with the Regional Theatre Young Director Scheme (RTYDS) to host emerging director Jesse Jones, for an 18-month residency. The programme nurtures young directors by offering them experiences to hone their craft, by providing a thorough introduction to life in a busy producing theatre.

More details about the scheme and how to apply can be found at www.rtyds.co.uk/rtyds-for-directors.php.

Three local directors have become Levershulme Arts Scholars and been given the opportunity to assistant direct Made In Northampton productions; Dan Hutton assisted James Dacre on Cat On A Hot Tin Roof in 2014, Alex Rex assisted Gary Sefton on The Snow Queen in 2015 and Leigh Toney assisted Luke Sheppard on Peter and the Starcatcher in 2016.

In 2014, the inaugural Perfect Pitch / Royal & Derngate Musical Theatre award was awarded to Chris Bush and Matthew Winkworth – a £12,000 commission to develop their brand new musical, Odd. The show was mounted in a concert version at Royal & Derngate in the Royal in February 2015. 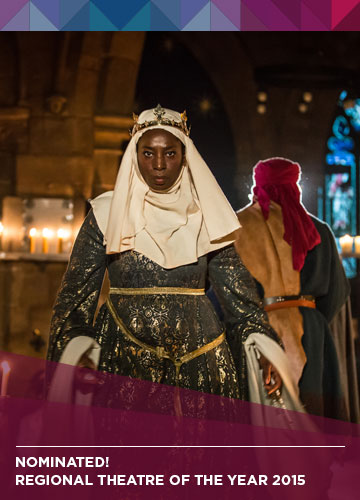