The Royal Theatre
The Royal Theatre, which opened in 1884, was designed by the renowned Victorian theatre architect C J Phipps who also designed the Theatre Royal Bath, The Lyceum in Edinburgh, Theatre Royal Glasgow and the Grand in Wolverhampton. It is a Grade II listed building. Whilst it has a nominal capacity of 583 seats, its practical capacity is 460 given the nature of the seating on the gallery benches. It is a ‘producing’ house and is supported by workshop and wardrobe. In 1927 it became home to the Northampton Repertory Players and has run as a producing house ever since, staging at least six ‘in-house’ productions each year. Amongst many famous actors to tread the boards at the Royal, the most notable is arguably Errol Flynn who was a member of Northampton Repertory Players in the early 1930s. It is famed, amongst other things, for its beautiful safety curtain, also known as the ‘Sipario Dipinto’ (meaning the Separator Painted). Created and painted by Henry Bird, this iconic feature was inspired by sources such as Commedia dell’Arte and Hamlet’s mirror.

Derngate
In complete contrast, The Derngate was opened in 1983. A Northampton Borough Council initiative, the venue was designed by RHWL for multi-purpose use. It can be configured to stage a variety of events including classical concerts, musicals, opera, dance, ‘in the round’ events such as snooker tournaments as well as gala dinners and product launches. It has a maximum capacity of 1,500 for classical concerts, with 1200 seats for ‘lyric’ performances and has been run as a touring theatre since, regularly welcoming some of the biggest names and shows on the circuit.

With the merger of the two organisations and the development of new production and artistic strategies, a whole new range of opportunities emerged to encourage cross-site work. The two auditoriums were used uniquely to stage Alan Ayckbourn’s House and Garden in Summer of 2001. Using one cast, two plays (House and Garden) were simultaneously played out in each of the venues with the cast running between each space for their appropriate ‘entries’. A huge critical success, the production cemented the joining of the two theatres and became a platform for future artistic development.

Recent years have seen the increased profile of Royal & Derngate as one of the major producing venues in the country, including being named Regional Theatre of the Year by the inaugural Stage 100 Awards in 2011, an accolade for which we were nominated again in 2015.

At the time that COVID-19 crisis closed theatres down in March 2020, Royal & Derngate had four Made in Northampton co-productions out on tour including the world premiere of Alone in Berlin, adapted by Alistair Beaton from Hans Fallada’s gripping wartime novel.

Highlights of our 2019 Made in Northampton season included The Pope by the Golden Globe and BAFTA-winning writer Anthony McCarten. His film adaptation of the play, Netflix’s Two Popes, was subsequently nominated for Best Adapted Screenplay at the Oscars. New musical The Season earned its writers Jim Barne and Kit Buchan earned The Stage Debut Award for Best Composer or Lyricist.

2019 also saw a number of our successes from 2018 transfer to London, including our Christmas show The Worst Witch, which went on to win the 2020 Olivier Award for Best Family Show for its West End summer run. James Dacre’s UK premiere production of Katori Hall’s Our Lady Of Kibeho transferred to the Theatre Royal Stratford East and was nominated for the Olivier for Outstanding Achievement in an Affiliate Theatre. Touching The Void, adapted by David Grieg from Joe Simpson’s best-selling memoire, also enjoyed a West End run, after touring internationally. Other highlights of the 2019 season included the world premiere of Bryony Lavery’s adaptation of The Lovely Bones.

Acclaimed productions from 2017 included Agatha Christie’s Love From A Stranger, directed by Lucy Bailey, and The Wardrobe Ensemble’s Education, Education, Education, which won a Fringe First and The Stage Award for Best Ensemble, and subsequently enjoyed a West End run in 2019.

Highlights of our Made in Northampton 2016 season include major tours of King Lear starring Michael Pennington, The Herbal Bed as part of the country’s Shakespeare celebrations, and the world premiere of Soul, a new play about Marvin Gaye, by Roy Williams, in a co-production with Hackney Empire.

Other highlights have included premieres of Mike Poulton’s adaptation of A Tale Of Two Cities, with music composed by Rachel Portman, which will be revived for a tour this Autumn, Nicholas Wright’s adaptation of Pat Barker’s Regeneration in a co-production with Touring Consortium Theatre Company, Cat On A Hot Tin Roof with original music by White Lies, the world premiere of Ayub Khan Din’s adaptation of To Sir, With Love, and the 50th Anniversary production of Alan Ayckbourn’s Mr Whatnot. Festival Of Chaos featured as part of London 2012 Festival and included premieres of three adaptations of classic plays – The Bacchae, Blood Wedding and Hedda Gabler, Spring Storm and Beyond The Horizon transferred to the National Theatre, and four time Olivier Award-nominated End Of The Rainbow (co-produced with Lee Dean) transferred to the West End and Broadway.

Our current Artistic Director, James Dacre, took over from Laurie Sansom in 2013 who in turn replaced Rupert Goold.

The Theatre is lucky enough to have an extremely dedicated volunteer archivist Michael Brailey, who maintains a significant archive of Royal & Derngate historical memorabilia. This is often used in displays around the building to accompany festivals or specific productions.

If you have a specific question about the Theatre’s history, or have any printed material or artefacts that you think might be of interest to the Theatre, please email [email protected] 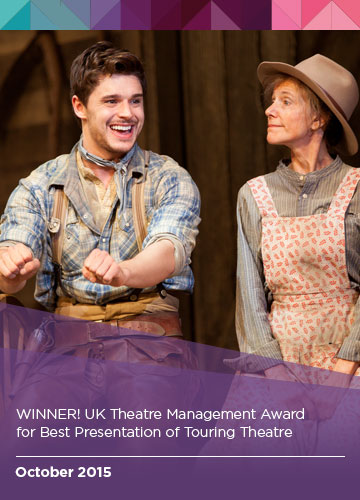